Season 2016 update and a Queenless hive

Honey harvest: A solid total of 57kg of pure liquid gold. Not as impressive as last year’s 89kg but this year’s season started too soon and ended too soon. It was too dry and by the time the blackberries blossomed, it was all over. Here’s a breakdown of when we harvested this year: 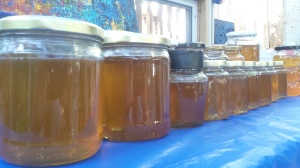 How do you save a Queenless hive after the drones have already been kicked out???

Just a couple of weeks ago, I was inspecting frames and supers of a large hive. Everything seemed to look great but as I got to the bottom of the hive, I started to realize there was no brood anywhere! I also didn’t see a queen. Normally, this wouldn’t be a problem. We would introduce a frame with eggs from another hive but at this time of year, the drones have already been expelled from the hive and even if a new virgin queen were to be born, there’d be no date for her.

So a quick decision was made to combine two hives so they would have at least one queen.

This is a bit tricky. A new colony introduces a new scent that triggers an alarm. A battle would ensue, with each clan thinking their territory had been invaded. To mask the scent of strangers, we added a sheet of newspaper sprinkled with “Wintergreen Essential oil” (strong mint scent) in the separation of the newly united hive. And to separate the potential of two queens (just in case we’d overlooked the second one), we included an excluder.

Now we were set. The worker bees would eat their way through the newspaper to get out.

A few weeks later, I had to check to see if it had worked. I did not see any queens but I was happy to see lots of brood and eggs on one side of the excluder.

And that’s a wrap! In the next coming weeks, we’ll be insulating the hives and we’ll vaporize for mite control. Hopefully, that will be sufficient to get them through the winter. Contact us in the spring if you’d like to acquire a set of these endangered species!