Thanks for coming! Let me beeegin with Oprah to get ya in the mood 🙂

1)  Does anyone have bees as pets and what satisfaction can come from it?

Pet owner: my mom
Satisfaction (her answer): “They can be trained to sniff out bombs or drugs. They also get to know you – if you feed them regularly, they respond accordingly.” Kinda like a dog, I guess 🙂

If you don’t believe me, watch this video: http://videos.huffingtonpost.com/bees-trained-to-sniff-out-bombs-517785805

2)  How many different types of bees are in a beehive and what do they do?

I’m glad you asked. If you can differentiate between the three types of bees – how they look and what they do, you are well on your way to becoming a beekeeper.

One queen = the mother of all. She holds the power of the future,  meticulously checking the cells for cleanliness before laying one egg after another. She releases pheromones (scents) keeping them in check and can live up to 6 years.

Worker bees = the girls. If you’ve been stung by a bee, it will have been from a worker bee because they are the ones who leave the hive to go hunting for food. They also build honey combs, seal the hive, collect pollen, feed their mother and unborn siblings, clean, make honey, guard and kill if they have to. In short, they do all the work.

Drones = the boys. They try to mate and/or lounge about and eat all the food which their sisters collect and make. They may be responsible for other things which humans have not scientifically determined although there are theories out there that drones make the girls happy and bring about a more harmonious hive.

So you think it’s a man’s world out there because the drones lead the good life, but in the end who’s got all the power? The queen.  And who’s got all the life skills to lead a healthy and successful life? The worker bees. Sadly, who gets kicked out of the hive to die at the end of the season because they are uttlerly useless and lazy? The drones.

3)  How can you tell the difference between a wasp and a bee?

I like this question because people always tell me they got stung by a bee (at the beach or at a picnic or just walking outside). And I’m like, are you sure it was a bee? And they’re like, “yeah a bee or wasp.” I’d like to make it really clear to everyone that there is a huge difference between wasps and bees. They look and act differently. Check out the picture below and please don’t discriminate 🙂 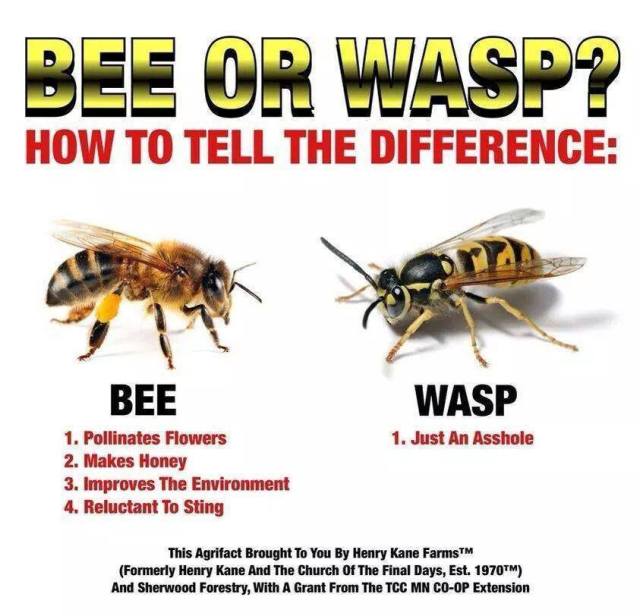 4)  Why is the venom so strong for such a small bug? Why does it have to hurt when they sting you?

I have often wondered the same. When bees sting, they give up their life (unlike wasps who continue to live) to protect their mother, brood and honey supplies and so it is meant to kill or at least scare you away. Here’s what I found out on what makes their sting so painful:

Sounds pretty deadly right? Fortunately it’s just a matter of time to let the swelling, pain and/or itchyness pass. Some beekeepers will let themselves get stung a few times early in the season and that will result in a higher tolerance level to bee stings where the pain of further bee sting turns into a mild irritation. Plus, bee venom is good against arthritis! If your symptoms include more than just swelling (headache, etc) you may be allergic. As well, if you are stung in the neck or higher, keep tabs on your symptoms because swelling might be quite a bit worse. In my two years of beekeeping I’ve never been stung, but a while back, I was somewhat close to our hives totally not expecting to be stung but since it was early September and getting dark, one darted out at me and took me by surprise. I guess I got too close for their liking. Check out how it affected my appearance: 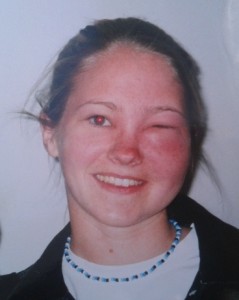 5)  Obviously I do my best to be mindful of bees but inevitably a sting still happens once in a while. What is the most soothing thing you can do for a bee sting?

When you get stung, they release a pheromone which lets other bees know that you are a threat. The chances of getting stung a second and third time are much higher now. Also, if you have to remove the stinger, be mindful not to pinch it as that will squirt out more venom. As for soothing remedies, there are lots which I have yet to try (if I ever get stung again!). Pick your favorite:

6)  How much time does it take for them to make honey?

Good question! Everyone always wants honey but nobody questions what it actually takes to make honey. In terms of time, it really depends on your bees, the season and location. Let’s say you have already got a well-established hive, from the point that they leave the hive to collect a surplus of honey to the point that we take it away from them can take anywhere from one month to four months and that is not including the off season.

7)  Why is unpasteurized honey so good for us?

Unpasteurized honey is non-heated honey and will be mentioned on the label. If it is pasteurized, it has a longer shelf life but as with many cooked items, some of the nutrients may get killed. Other than that, I don’t know much more but the picture below is the gist I get from looking around. 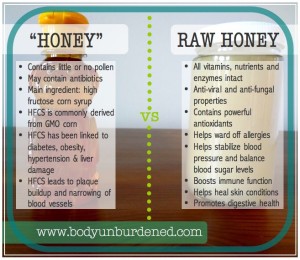 I wish I could say “yes” to everyone who asks but reality is we just make enough to get us through the winter. Haha. We don’t sell it and rarely give it away and that’s just because it’s a lot of work for a little bit of honey. If I were to have a farm with 30 hives, then yes but currently we just have the allowable four hives on residential property. Until then, I’d recommend getting your own bees if you want to be sure of what’s really in your honey.
I work hard for the honey
So hard for it, honey

9)  Do bees prefer one flower over another, like if they had to choose?

They do! They actually like the simple flowers and often flock to what we call “weeds” such as dandelions, daisies and fireweed. They also really like herbs, blackberries, maple trees, nut trees, etc. Bees like single flowering plants so they are not at all into roses or carnations like some men might think. 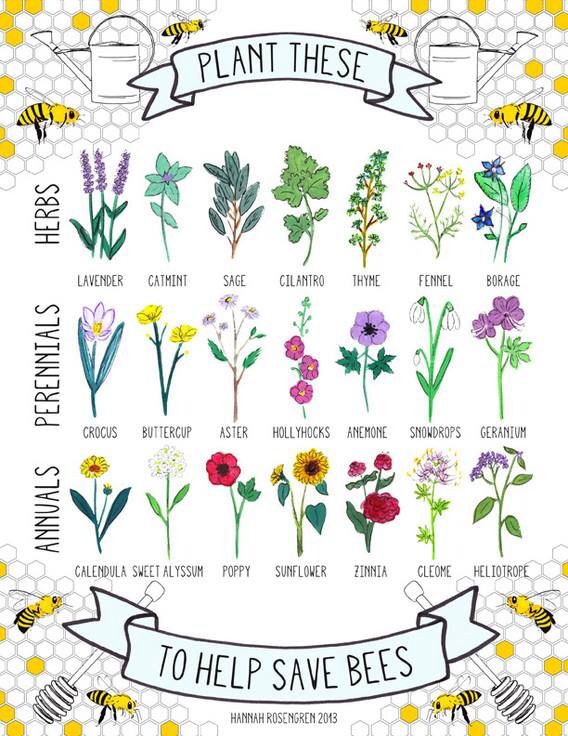 10)  What flower is their favorite for pollen gathering?

Worker bees snuggle close together surrounding the queen in the middle. They “shiver” to generate heat and consume lots of honey to keep their metabolism up. They will remain inside until temperatures rise to 8 celsius. Because bees won’t poop inside the hive, they will wait until they can go outside again for a “cleansing flight.”

12)  What happens if one bee is kidnapped and relocated kilometers from its nest?

If it’s less than ~3 km, it will find its way back.
If it’s more than ~3 km, both the worker bees and drones will try to find a new home if it doesn’t already have one. The queen can also find her way back from her mating flight miles away. She can fly into a new home it if’s queenless.

13)  Why is it that humble bees seem to move so slowly when walking?

I don’t know what you’ve been looking at but it obviously hasn’t been bees because in general, they are NOT slow. However, if you do want to see them moving slowly, watch this awesome youtube of bees in slow motion.

The million dollar question. It’s true, they are dying and nobody knows for sure but everyone knows it’s one, all or a combination of the reasons I have listed below that make up the “Colony Collapse Disorder” (serious die-off of honey bee colonies in decades):

Among so many other youtubes, here’s one explaining their decline: http://videos.huffingtonpost.com/why-are-the-bees-dying-517884900

15)  Why is there so little public awareness about the importance of bees?

I have to admit, I really wasn’t into them nor their honey a few years back. I assume that many people feel the same way. It wasn’t until I was completely immersed (literally in a swarm), that I realized a couple things:

In a nutshell, regardless of how you feel about them, the “Colony Collapse Disorder“(see previous question) is a serious concern because “honey bees account for 30 percent of everything we eat” and “60 percent of fruits and veggies we rely on, need honey bee pollination.”(Blackiston 2009).

If pure honey or having natural pollinators are not enough of an incentive to become a beekeeper, maybe potential funding for beekeepers will be a thing of the future. Did you know that, “the value of honey bee pollination to the US agriculture is $14 billion annually” (Blackiston 2009)?

Here’s what Obama had to say on his mission to save the bees: http://www.cnn.com/2014/06/22/politics/honey-bees-protection/

Not that you need to become a beekeeper. Here are simple and cheap ways to contribute to the bee cause:

16)  Do you think humans and bees can live in a symbiotic relationship?

YES! We already do. We can further the relationship by increasing the number of pet owners as well as their proximity to our homes. Hives on rooftops, balconies are already a reality. Hives inside the house? Birdhouse hives? Drug sniffing bees inside the RCMP? Think of the possibilities!

Beekeeping in New York was illegal until 2010. Now, they’re promoting it. Check it out: http://videos.huffingtonpost.com/waldorf-astoria-installs-beehives-on-nyc-rooftop-517388656

Beekeeping for those without a garden, balcony or accessible roof: http://inhabitat.com/philips-unveils-sexy-concept-bee-keeping-gadget/

Welcome to the Bee Hotel in France: 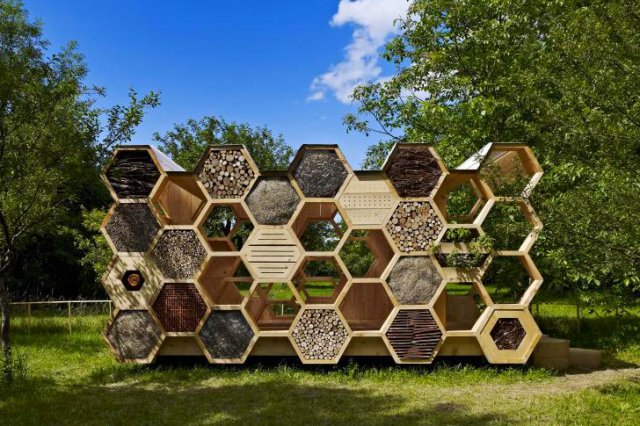