The Girls, aka Worker bees

And do they ever work! In their short life span of 6 weeks (in the summer) they literally work themselves to death. The girls spend their first three weeks inside the hive and get to work as soon as they emerge by cleaning up their birth. Since there is so much work to do, a worker bee has no time to relax. She scrambles to get everything accomplished before her life is up. You’ll never see a worker bee taking a break because she’s too beesy…

The girls as builders and architects feeding larvae

The last half of their life (in the summer) is spent outside foraging for nectar, pollen, water and propolis (resin collected from trees). The life of a field bee (outside) can be quite stressful as they must fly far sometimes and return home before it gets cold. During the winter months a worker bee can live up to eight months if she does not freeze to death, is overcome by disease/sickness and has enough food.

Here the girls are feeding their baby sisters and brothers.

Here they are protecting their home and/or bringing home their hard earned honey.

The worker bees are busy adding enzymes to the nectar, fanning it to evaporate the water and capping the honey.

Caution: Two eggs in a cell signal trouble. A worker bee has taken it upon herself to start laying eggs in a desperate attempt to keep a colony alive when a queen appears to be absent. Even though worker bees have ovaries, their eggs can only produce drones. Your hive needs immediate attention or it is doomed. 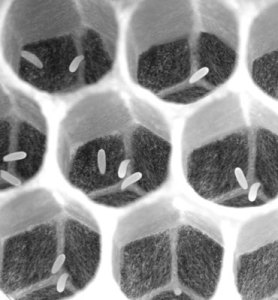 Although I have seen two eggs in the same cell in one of our hives, it’s incredibly hard to take photos of such tinyness. Hence, I googled it and realized it can even be more than two eggs at a time. Our hive which exhibited such misfortune is undergoing a small experiment which I’ll blog about later.

Worker bees are truly amazing creatures. I can’t imagine only living to work. She must really enjoy her job although she also never mates, never indulges, never delays and she’ll give up her life even earlier if she’s forced to protect her mother and baby sisters and brothers. Not sure I could ever bee quite as humble and generous as that 🙂

This entry was posted in Worker bees. Bookmark the permalink.