She’s the CEO and mother of up to 60000 bees. She controls the pace of productivity, attitude of her family, ensures survival of a hive and can live up to six years longer than the rest. She’s continuously surrounded by attendants (worker bees) who feed, groom, collect her excrements and obey her. 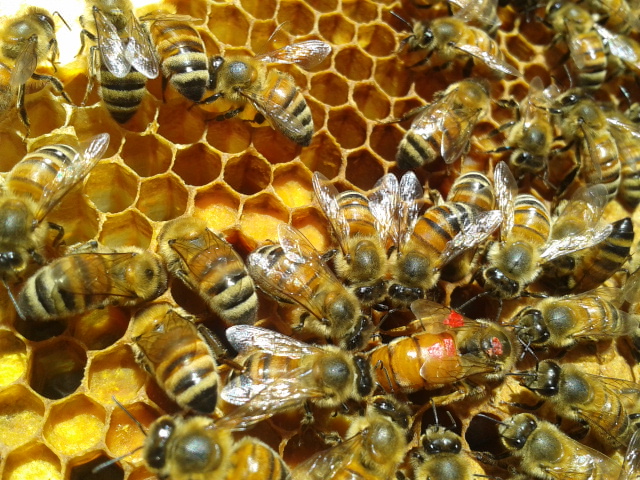 Thy royalty surrounded by her attendants. She wasn’t supposed to get nail polish on her wing but they hate the smell and try to escape it.

A queen bee has no king. Her majesty lives with her girls (worker bees) and the boys (drones).

The evasive virgin queen begins her life by familiarizing herself with her hive. During her first three weeks she must have the chance to go on at least one mating flight. This date is weather dependent as she will not go out on a rainy day. If she misses her chance, she’ll end up as a drone laying queen which is very problematic for the beekeeper as for the survival of the hive. Normally, she’ll mate with 12-15 drones from a different hive, storing sperm which she can then selectively release for the rest of her life (wiki). Her children are often half siblings resulting in a colorful population. Check it out:

Drones (the boys – bottom row), on the other hand, can only mate once if they are lucky. And the poor girls (worker bees – top row) never mate (more about drones and worker bees coming with next entry). After mating, the queen swells up and she starts laying eggs. When we find her, we will mark her with a dot of nail polish. To this point, I have not yet been able to find an unmarked queen on my own. Can you? 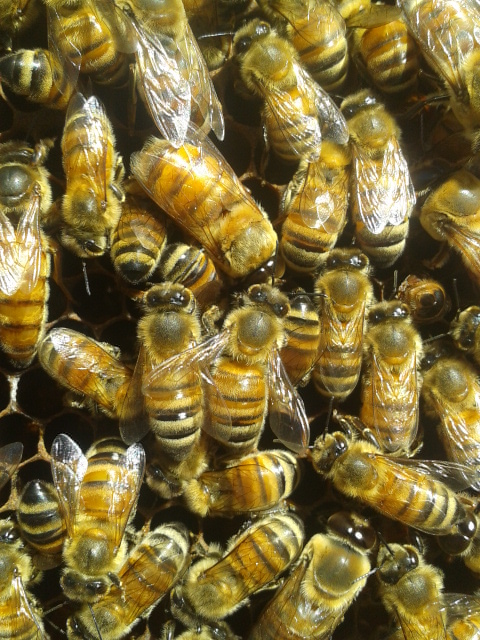 You guessed right! She’s to the far left.

She’s the one with a slender but longer abdomen. If you are having difficulty finding her, look for brood first. She’ll most likely be close to where you spot eggs. Every time I do see her, she’s going up and down the frames, meticulously inspecting cells for their size and cleanliness while searching for suitable cells to do what she does best: lay eggs. She even gets to control the sex of her eggs. If she wants a worker bee, she’ll add a sperm to the egg.  In the bee society, it’s all about harmony and survival. So she’ll do what’s best for the team.

Here she is laying an egg right now. A young queen can lay up to 2000 eggs per day. Does that sound very royal to you?

Our young queen moves much faster than our old queen but we kept our old one because she’s gentle, diligent and we cherish her for her relentless effort and success at bringing up an extraordinary team. A queen sets the tone with her pheromones for everything. Here are just a few examples of such traits: